Iloilo city is home to so many good things. Drivers don’t honk their horns against each other when agitated by traffic. No candy wrappers are littered on the streets. A police officer gave us the one-peso short change when the jeepney driver forgot to hand it. A random stranger at the ferry helped me carry my bags and ushered us to the terminal going to the market. A young man flagged the cab for us on the way to the airport. The lady at the market allowed us leave our baggage at her store while we toured around the city. Then we tasted the best La Paz Batchoy of our lives. The underrated yet so delicious coffee at a wet market. All these and more – Iloilo has unleashed the little yet grand things to be loved about its city and its people.

Spending most of our time at the islands of Gigantes and Guimaras, we only had a brief stay at Iloilo City to do our last minute errands before heading back to the airport. But that never hindered us from exploring a few of its hidden gems and featured attractions. Short interactions with the locals allowed us to understand what hospitality and generosity really meant. In our short stay, we definitely took the time to mark- off “food trip” from our checklist, and a quick visit to one of its old churches.

Iloilo will always be associated to its signature dish, La Paz Batchoy. Miki noodles, topped with pork organs slow-cooked for hours to bring out the innate meaty flavor. There are three famous Batchoy stores in the city: Ted’s, Deco’s and Netong’s, but the original creator of this sumptuous dish is still uncertain until today. We had the chance to try out Netong’s at La Paz public market. The legendary dish, with its famed name across the region, quite gave me the assumption that it’s a big restaurant with crazy diners and numerous staff – but it’s not. It’s a simple eatery tucked in the wet market of La Paz, nothing too fancy but surprisingly one of the most talked about in town when you speak about batchoy. 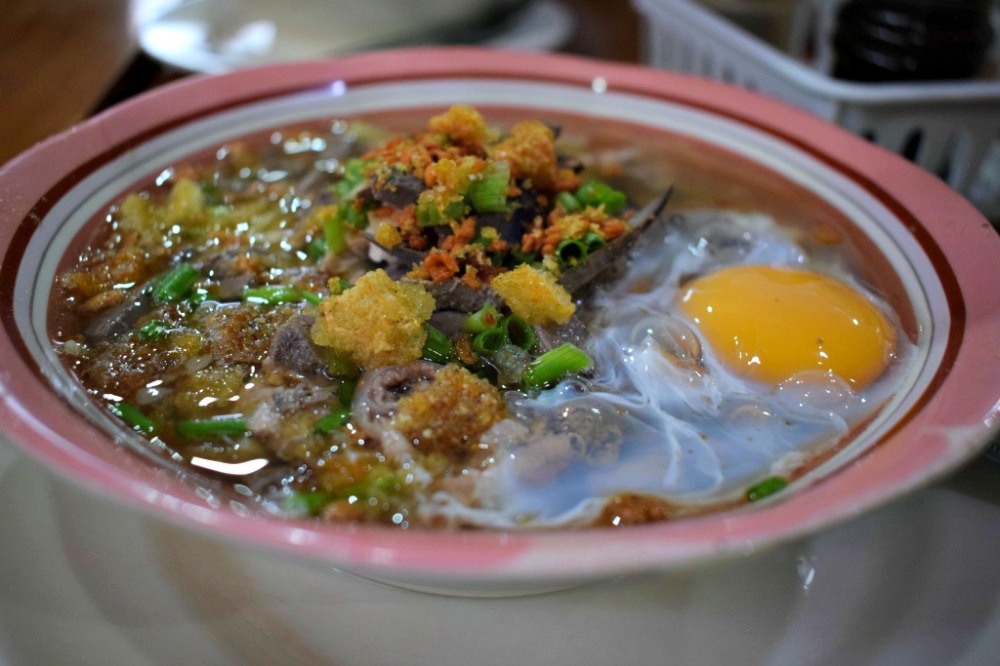 The non-intimidating set up would remind you of dining at your old grandmother’s house and sit comfortably as you wait for her specialty batchoy after a tiring day at school. And though it is an eatery, it is air-conditioned and they have designed the interiors too to make it more aesthetic.

The invigorating noodle soup is loaded with so many ingredients such as pork organs (liver, spleen, kidneys, heart), beef loin, chicken stock, shrimp stock, crushed chicharon (pork cracklings), egg and garnished with spring onions. And true to its rumors, their batchoy is to die for. I haven’t tasted any batchoy as good as this in my entire life. Whether it is the pioneer or not, it holds the standard way too high for batchoy lovers. 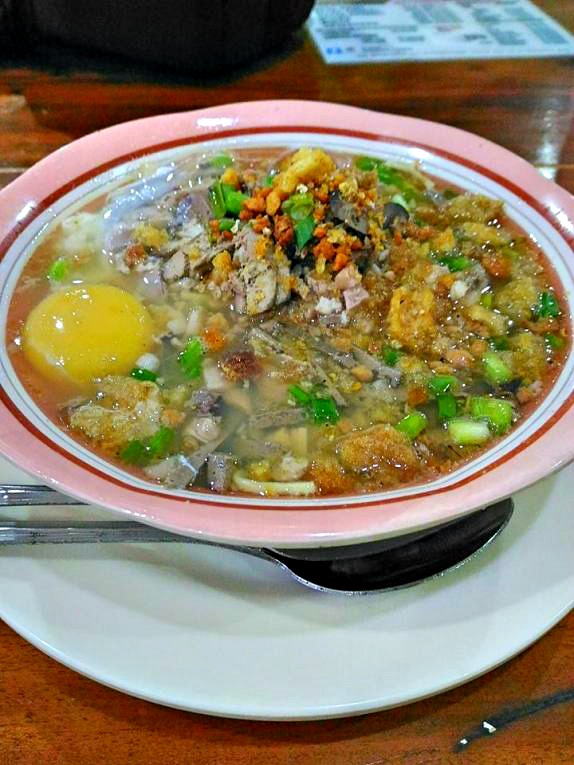 They also have other offerings in the menu such as those you can accompany your hot batchoy with. Short orders and viands are displayed outside as well. 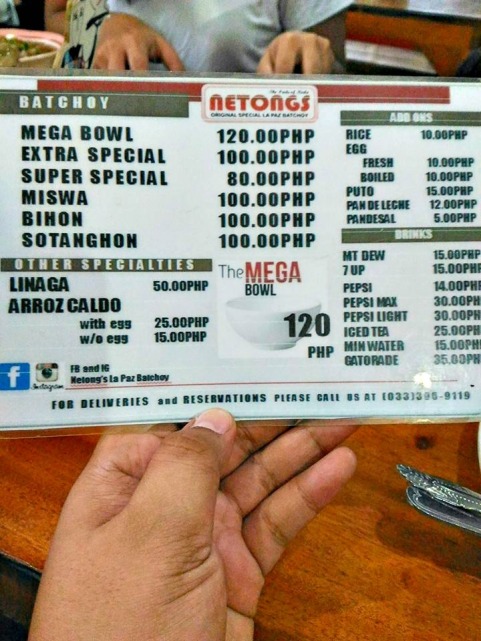 Another hidden gem inside La Paz market is Madge Cafe, just a few steps away from Netong’s. After getting our tanks filled with the superbly satisfying batchoy, we looked for desserts. We were pointed to Madge, another foodie’s haven that’s been long established and known for its unique blends of coffee. And here’s the catch: delicious concoctions of coffee at less than a hundred bucks. And you wouldn’t experience that in Manila where famous brands rip- off cash from its customers. 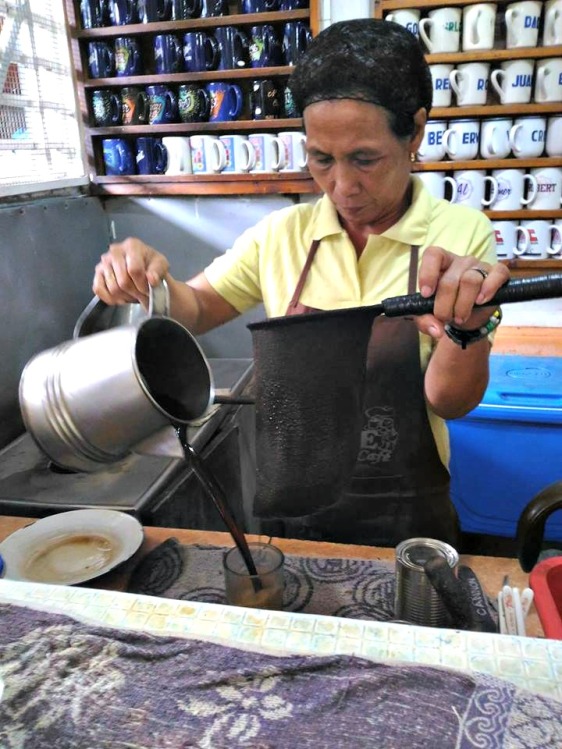 I don’t know how many times this lady has posed for a photograph, mostly for bloggers. It’s fascinating to watch how the coffee is prepared with gusto, and the process seems to be precise for each mixture. I asked where the beans come from, she said it’s from a local farm in Northern Iloilo only. Nothing imported, just purely homegrown. Amazing. The brew is prepared using a flannel sieve, called a culador, which holds the ground coffee and allows the flavor to build with every added layer of beans. 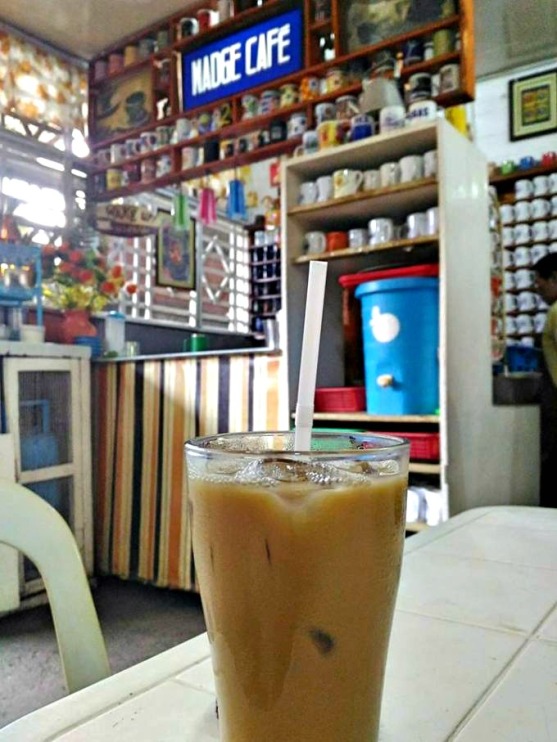 I didn’t ask the secret ingredients or methods to make the recipe exceptional, but the product is totally awesome. It has a distinct taste you couldn’t find elsewhere in the commercialized coffee shops in Manila. This was iced cappuccino for 60 pesos: not too strong, not too sweet. It’s a perfect blend for a coffee-lover like me. 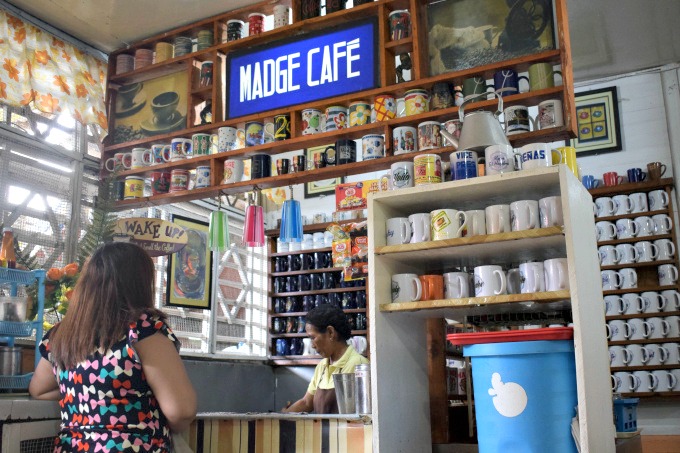 What’s flattering to know as a customer is that they have customized the mugs with the names of their regular patrons. If I reside in Iloilo, I’d be a member of the club too. You can buy a mug however, for 150 pesos. But of course, I would prefer my name to be engraved there, being a loyal customer. If only they have a branch in Manila, sigh 😦

If you’re not a regular customer, your coffee will be served in tall glasses. For to-go coffee, Madge Cafe has utilized empty evaporated milk cans instead of plastic or styro cups. 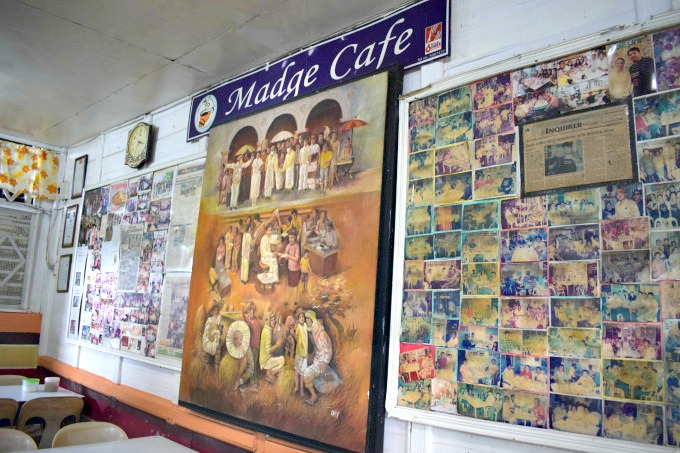 And just like any old restaurant or cafe, it’s proudly boasting its achievements through the decades, since 1951. I loved the painting at the middle- it’s pretty symbolic of the hard work of the owner. On the right are photos of famous personalities who have tried out their coffee. The faded photos, simple yet perky ornaments, white monoblocks and tables show how they preserved the classical, old-school feel of Madge, even as innovations outside have constantly emerged. 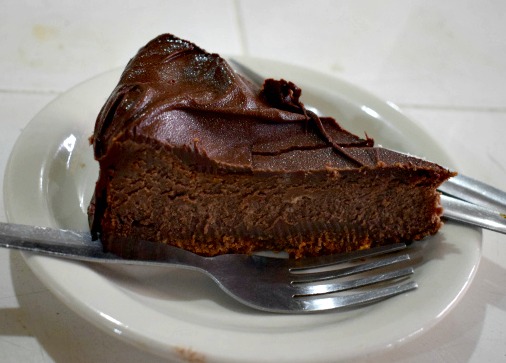 They also have sandwiches, pastas and breads in their menu, but we ordered this cake. French Chocolate Cake, from Calea, a famous cake supplier in Bacolod. 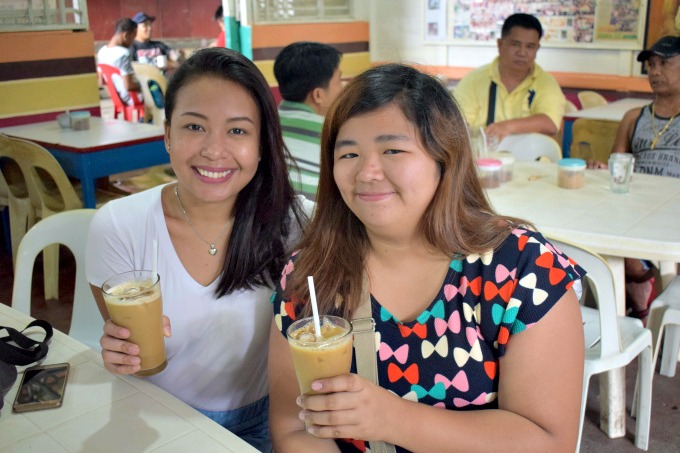 Of course, we couldn’t get away without pasalubong. Another trademark delicacy of Iloilo is Biscocho, made popular by Biscocho Haus. Biscocho is baked bread coated with butter and sugar on top. When we came there, customers line up at the counter with their big boxes. Orders are definitely made in bulks.

Original Biscocho Haus opened its doors in 1975 and has been a favorite dessert of the Ilonggos since then. With the growing demands of their customers, they expanded their product line to other sweet treats such as butter scotch, galletas (thin cookies), barquillos (wafer rolls), tarts, candies, polvoron, and many others.

I am not fond of Biscocho before due to its texture. But when I tasted that of Biscocho Haus and Trappist, I became an instant convert. I love dipping my Biscocho in a warm cup of coffee or eat it with noodle soup in the morning. As for the Ilonggo recommendation, it’s best partnered with Molo Soup. 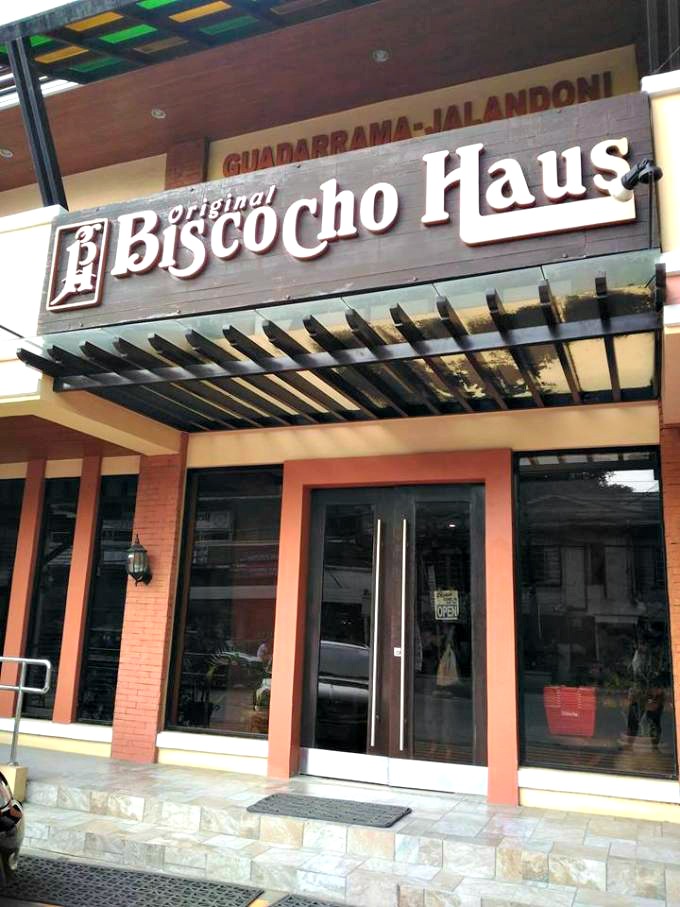 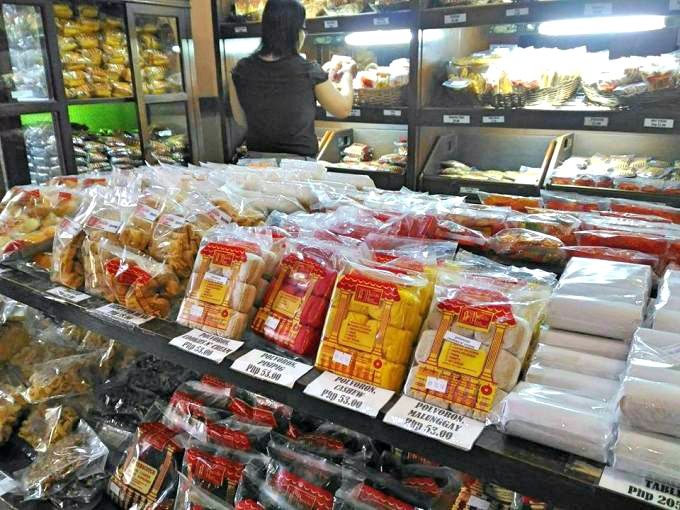 Visiting old churches of a certain province is a must in travel itineraries. It’s taking the walk to history lane and appreciating the architecture of old edifices, such as that of Jaro Cathedral. It was first built in 1874 by the first Bishop of Jaro, Mariano Cuartero.

The detached bell tower across the street is its distinctive feature. The tower was beside an older church, but it was destroyed by an earthquake. It also has a wide staircase at the facade of the cathedral.

The interiors are well-preserved, but you may observe its constant renovation through the modern furnishings. It has simplified arches and windows, following the Romanesque Revival architecture. 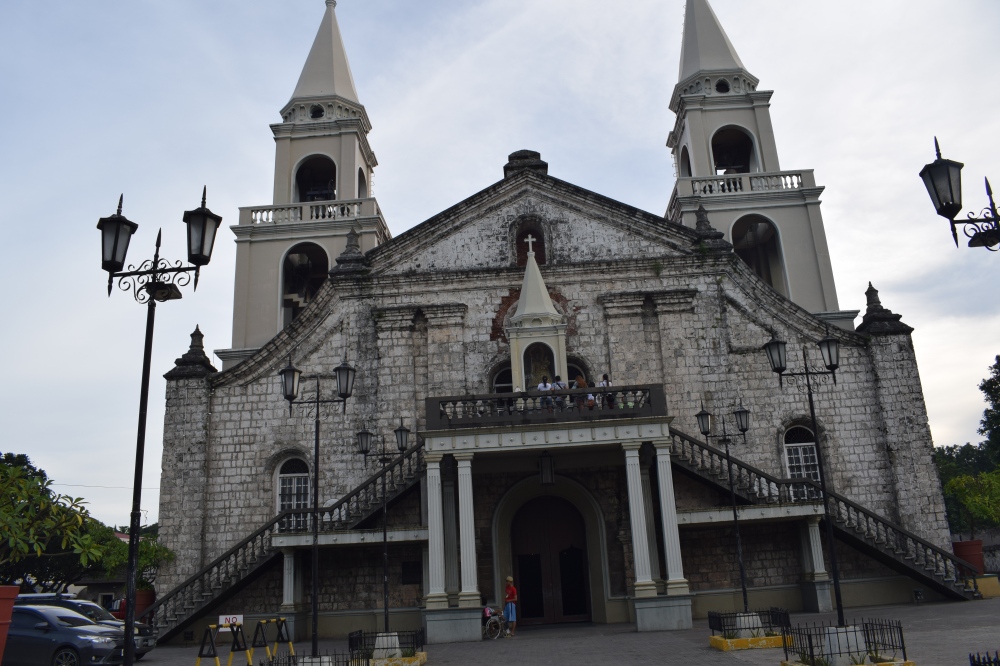 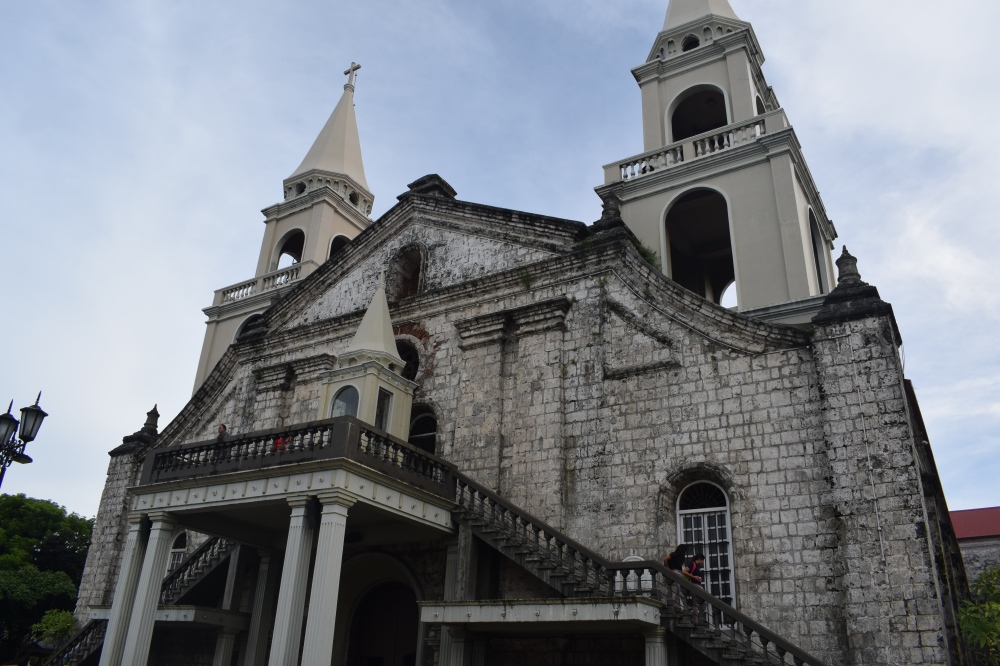 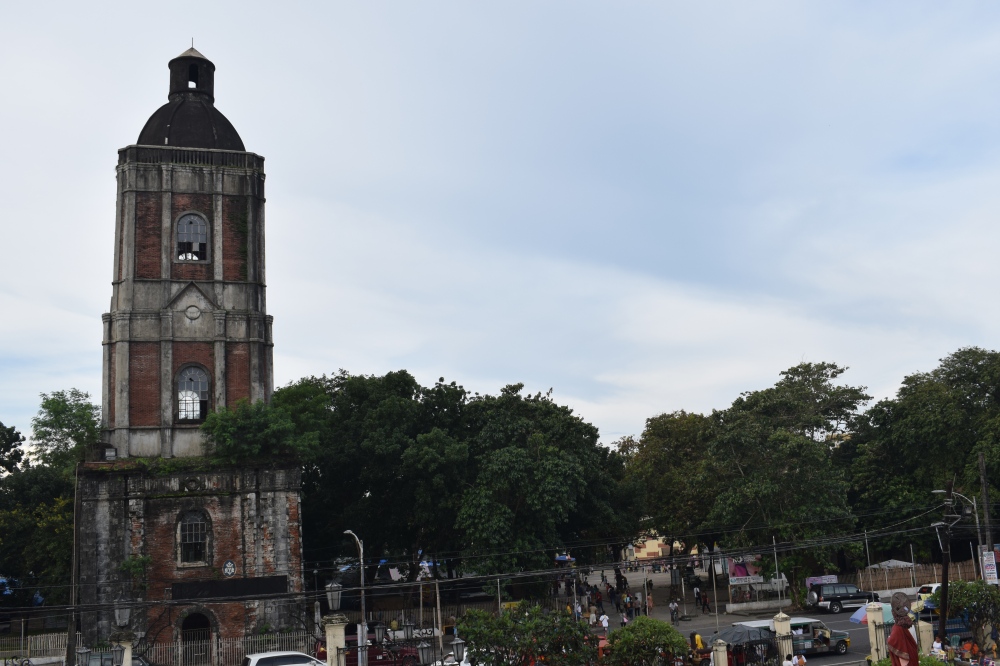 Known as the City of Love, this side of the Philippines has certainly many wonderful things to offer and a recommended tourist destination to those who wanted to expand their horizon on food, culture, history and people. There are countless things to explore I know, but we had limited time. Til next time, Iloilo!

Hi! I'm Danica, a corporate junkie in one of the global firms in Taguig. Writing, food and travel are my passions. This blog is my personal space to express myself and the things I am passionate about: echoing my insights and musings in life, whether about a new restaurant on the block or a profound trip I had. Join me as I continue discover God's awesomeness in diverse life experiences, places, and people. Thank you! View all posts by Danica Airelle Marasigan